Today, I had the honor of attending a ribbon cutting ceremony at the Langdon Meetinghouse to celebrate the completion of the downstairs restoration. 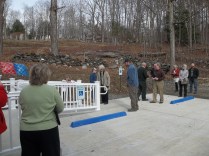 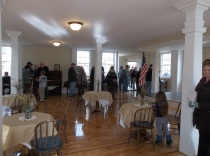 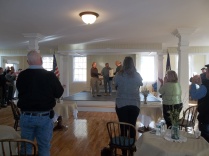 The Langdon Meetinghouse is not just a NH landmark, I consider it a national treasure. For over 213 years, the people of Langdon have used this building as their community center, seat of government, and at one time a place of worship. Whatever its role at the moment, the Meetinghouse is always the true center of Langdon.

Even more remarkable, while some funding has been available, this building survives only because of the commitment and dedication of local people. You have taken this on, as others before you have, and it is through your efforts alone that this timeless piece of NH history remains.

As Chairman of the House Transportation Committee, I also serve on the New Hampshire Conservation Number Plate Advisory Committee, which oversees LCHIP funding from those plates. I thought that when I first began going to those meetings, I would make it a point to ensure that others knew of your extraordinary accomplishment. I did not get the chance. People across the state already know about it. It actually became a topic at the end of our first meeting, when someone expressed amazement at the resources generated, and volunteerism of a tiny town like Langdon. It was generally agreed, with no prodding needed from me, that your efforts should be an example to the rest of the state.

In a day and age where people tend to forget history, it is important to preserve historical places so that we can see it, feel it, touch it. I am personally grateful to Langdon for preserving the Meetinghouse so that my children can walk into NH history and experience it themselves.

Steven Smith is a member of the New Hampshire House of Representatives, serving his 6th term. Rep. Smith currently represents Acworth, Charlestown, Goshen, Langdon, Lempster, and Washington. Rep. Smith is the Deputy Speaker of the NH House.
View all posts by Rep. Steven Smith →
This entry was posted in Uncategorized. Bookmark the permalink.