A charade at the Whittemore Center House session

Posted on June 19, 2020 by Rep. Steven Smith
I have known Rep. Abrami for ten years. He is trusted and respected by many on both sides of the aisle, and with good reason. He nails the current situation in this article. You should be extremely concerned about the House leadership because the process matters. It is there to keep us, amateur Legislators, from making horrible mistakes. Thankfully, in a government of 425 people (400 Reps, 24 Senators, 1 Governor), the process keeps enough eyes on the bills to catch things. The failure of this Session is that the majority leadership has been making decisions among a handful people and ignoring the process. Even if they mean well, they are going to be wrong on many things. I have served in the minority and majority. In all cases except for my first term, the parties worked together on many issues. It is a real shame that this prudent method has been abandoned by this Speaker and his team. ~ Steve
Rep. Pat Abrami: A charade at the Whittemore Center House session 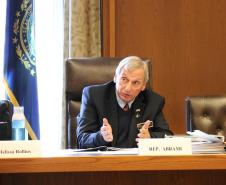 There has been a lot of social media chatter that somehow Republicans were blocking progress on House bills by not voting for Rule 65A, which changed our House calendar deadlines because of COVID-19. The reality is that whether we voted up or down on these remaining 32 bills made no difference since the deal was stuck between Democrat Senate and House leaders as to which House bills would live or die in the Senate without hearings.

Yes, that is correct. The fate of hundreds of House bills backed up in the Senate, not just the 32 effected immediately impacted by Rule 65A, would be made by the Senate without House bill sponsors being given an opportunity to defend the House position in a Senate committee hearing. Whether or not the Rule 65A was adopted, it was decided that June 30 would be the last day to act on Senate bills and the last day to concur on amended House bills. While we were at the Whittemore Center session on June 11, the Senate was sealing the fate of all these 32 bills that same day. They weren’t waiting for a House vote on these bills. This House session was all a charade, which was very upsetting to me and many other hard-working State Reps who were elected to do the peoples’ work.

Let me explain further. At our House session of March 12, seeing the COVID-19 wave about to hit, the House voted Rule 65b. This rule said that the House calendar could be modified with the concurrence of Democrat and Republican leadership. Republicans interpreted “concurrence” per the dictionary to mean “agreement.” In the three months that had passed there was only one short call between House Democrat and Republican leaders to discuss a path forward. There was no agreement, instead the House and Senate Democrat leaders negotiated without House Republican leadership input even being requested. Most Republicans like myself thought after June 11 we would add two months to the calendar to get our work done, albeit, via Zoom. My House Ways and Means Committee just spent the last month having work sessions with stakeholders on bills, voting bills out of committee, and doing revenue estimates all via Zoom. We became quite proficient with Zoom.

It turns out the Senate leaders wanted to be done with all of their work by June 16, a date they picked as their last Senate session day. So, this is how the Democrats on their own, without Republican say, worked this with the Senate. The Speaker asked the Democrat House chairs to rank all hundreds of House bills passed during this session based upon importance. This should be insulting to every State Rep since all bills are important to someone and in all cases were already deemed important by the whole House since they passed on the House floor, even the 32 second committee bills in question. The list of so-called important bills was given to the Senate for consideration. The fate of my four bills that passed on the House floor on voice votes is unknown to me as the prime sponsor.

Yes, you are right. How can that be?

The last several weeks before June 11 saw the production of “Christmas Tree Bills” in the Senate, a technique of hanging many bills on one House bill. At the Whittemore Center session much ado was made by Democrats about an office of child advocacy bill and a bill that set forth the 10-year transportation improvement plan that were two of the 32 bills not voted on because the Rule 65A vote failed. House Republicans knew that both these bills, among many others, were already hanging as Christmas ornaments on other House bills in the Senate, placed there by the senators. Remember the deal was already stuck between the House and Senate Democrat leadership as to which bills lived or died. Understand Senate bills were hung on House bills as well. A vast majority of Senate bills never passed the rigors of House hearings. That is correct: No House hearings on Senate bills either.

Adding insult to injury, it gets worse. This deal says that when the House reconvenes session on June 30, we will be voting to concur or not concur on 26 bills, many of which are the “Christmas Tree Bills.” That is hundreds of bills reduced to 26, with many bills killed off without public hearings. I heard about one bill with 64 bills hanging off it. What is missing is non-concur with a request for a conference committee between the House and Senate if we do not agree with the Senate. This is unprecedented and unfair to all involved. The Senate is saying to the House: Take it or leave it, we are going home after our June 16 session.

As can be seen, the fix was in before our June 11 House session. The fate of the 32 bills in question was already sealed. The whole session was a charade not worthy of each and every member of the NH House or the people of NH. Please go to gencourt.state.nh.us and navigate to the June 12 Senate calendar and you will see 340 pages of amendments which is the language of the bills that have survived this charade. The irony is it was the Democrats blocking progress on the scheduled bills and Republicans trying to promote a fair process for all bills.

Steven Smith is a member of the New Hampshire House of Representatives, serving his fifth term. Rep. Smith currently represents Acworth, Charlestown, Goshen, Langdon, Lempster, and Washington. Rep. Smith is the Chairman of the Sullivan County Delegation.
View all posts by Rep. Steven Smith →
This entry was posted in Uncategorized. Bookmark the permalink.